Hail to the Narcissist-in-Chief. 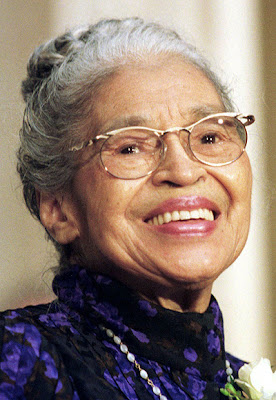 December 1, was the anniversary of Rosa Parks' famous bus ride in Montgomery Alabama. After being tired from a long day at work she refused to give up her seat to a white man. I will, for the sake of younger readers point out a fact you may find unbelievable in this day and age. In 1955 racial segregation was everywhere. The public bus Rosa Parks was riding had a "white" section and a "colored" section. When the white section was full it was fully expected that blacks give up their seats in the colored section to any white passenger that needed a seat. The bus driver ordered Rosa Parks to give up her seat to a white passenger. She did not give up her seat and was arrested for civil disobedience. That was only 57 years ago, well within the lifetimes of many people alive today. I mention that because many of my younger non-African American friends look at me strangely when I mention the racist attitudes of that time. They think it never happened. Anyway I mention this because for the anniversary of that famous bus ride, President Obama remembered the occasion with a photograph...of himself...on that bus. Parks ride and subsequent lawsuits and the Montgomery Bus Boycott spurred the civil rights movement which ultimately led to the Civil Rights Act of 1964 (which btw the democrats opposed) and subsequent pieces of legislation. So in a sense I can see where a picture of BHO might seem appropriate; over half a century of civil rights and when now have a black President. But in true narcissistic fashion, the POTUS' gesture was an after thought. The photo in question was taken months ago as part of his re-election campaign. 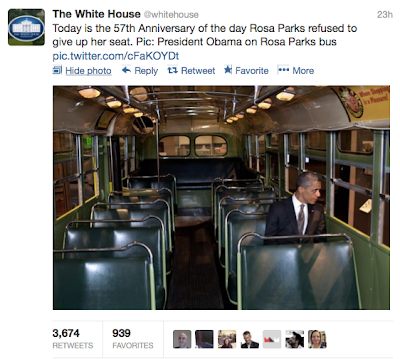 Personally I find it insulting. BHO has done nothing for race relations except set it back. There has not been a more race baiting, divisive black leader in this nation's history. He certainly hasn''t acted in the spirit of Rosa Parks.
Posted by Dane Bramage at 1:46 PM