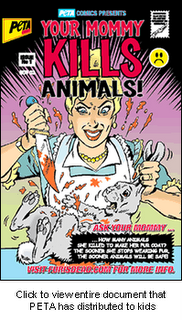 Mark at Chester Street has this great post about PETA.

"Even if animal research resulted in a cure for AIDS, we'd be against it." - Ingrid Newkirk, President and Co-Founder of PETA

"Six million Jews died in concentration camps, but six billion broiler-chickens will die this year in slaughterhouses."
Ingrid Newkirk, President of people for the Ethical Treatment of Animals

"I openly hope that it comes here." Ingrid Newkirk, PETA Co-Founder, on her desire for a USA hoof-and-mouth epidemic

Check out the whole thing and while you are at it read his post on the Da Vinci Code. It does a great job at debunking the whole mess and sums up my feelings on the whole controversy thing.

Do you remember? You've actually read this story before—in the garden of Eden (Genesis 3).

Let's think about what happened there.

Satan comes to Eve and does three things:

* First, he challenges the veracity of God's Word (did God really say?)

* Second, he puts forth his counter truth claim (you will not surely die)

* And finally, he informs Eve that there is a foul conspiracy afoot; that God is keeping her from "secret knowledge" which, if she would just listen and follow Satan's inside information, she would become like God, knowing this secret knowledge herself. And, of course, she would live happily ever after.

Sure, Dan Brown synthesized early works such as The Templar Revelation and Holy Blood, Holy Grail, but in reality, his plot is just an elaboration of the line of thought found in the Original Lie.
It must be part of our nature to love a conspiracy story because we are fascinated by them. Satan must have understood this when he approached Eve. Now Brown hands us the same old stuff:

Wow! I didn't even have to type a single word!
Posted by Dane Bramage at 5:47 PM