He's Not Afraid of All Those Swiss Army Knives

Qaddafi Calls for Jihad on Swiss for Minaret Ban 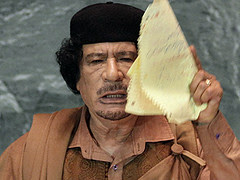 The Libyan Loon has decided that Switzerland is an enemy to the Islamic people and is calling for Jihad(holy war) against the little European nation.


Muammar Qaddafi also urged Muslims everywhere to boycott Swiss products and to bar Swiss planes and ships from the airports or seaports of Muslim nations.

"Those who destroy God's mosques deserve to be attacked through jihad, and if Switzerland was on our borders, we would fight it," Qaddafi was quoted by Libya's official news agency JANA as saying. He spoke before a gathering marking the birthday of the Islamic Prophet Muhammad in the Libyan city of Benghazi.

In November, Swiss voters overwhelmingly approved a constitutional ban on minarets, in a controversial decision that put Switzerland at the forefront of a European backlash against a growing Muslim population.

In case you didn't know, minarets are towers usually with balconies from which the call to prayer is made. 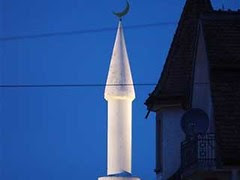 The minaret has been used for centuries by muezzins (Arabic mu'adhdhinun, Muslim criers) for the call to daily prayers, but its original use is unclear. The earliest mosques in Arabia had no minaret, and the first towers in seventh-century Cairo (Egypt) and Damascus (Syria) may not have been built expressly for the call.

Minarets have been designed in many styles over time and space. Early ones were often square or octagonal, some with winding exterior staircases, while the sixteenth-century Ottomans built needle-thin, cylindrical minarets with conical peaks. Today, the muezzin does not always climb the minaret to call for prayers; minarets are often outfitted with loudspeakers.
— Elizabeth Thompson at Answers.com

Swiss officials declare that the ban in no way inhibits muslims from practicing their religion. But the ban on minarets is viewed by many as the most extreme reaction to European concerns about growing muslim populations.