The truth is, however, that if you go to South America, you will find a huge number of conversions to Protestant Christianity. If you go to Korea, you will find Christian churches with 100,000 members. If you go to China, you will find 100 million Christians. And if you go to Africa, you'll find that countries whose populations were only five percent Christian 100 years ago are now 50 percent Christian. These trends have not gone unnoticed by historians, who are startled by them and have attempted to explain them away, and they are the empirical basis for my claim that God is doing very well in this world. What's important to understand is that the New Atheism is not a triumphant cry of success, but rather a bitter reaction to the success of religion. -Dinesh D'Souza

Wow. Roughly 32 days into the Obama era and "historians" have labeled Bush one of the worse 10 Presidents of all time.

How can that be? I mean they ranked him lower than nut case farmer Jimmy Carter. That fact alone tells me there is political agenda behind the ranking more than an objective look at the presidencies of 42 men.

"How we rank our presidents is, to a large extent, influenced by our own times," Medford said in a news release. "Today's concerns shape our views of the past, be it in the area of foreign policy, managing the economy, or human rights. . . . Lincoln continues to rank at the top in all categories because he is perceived to embody the nation's core values: integrity, moderation, persistence in the pursuit of honorable goals, respect for human rights, compassion; those who collect near the bottom are perceived as having failed to uphold those values."

So if these scholarly historians perceive Bush to be a bad president in the context of today's concerns, they feel justified in putting him in the bottom 10.

U.S. News and World Report mentions another list of 13 Worst Presidents. GWB didn't make it but Nixon did (tied at 9th with Hoover)and Carter was #11. The bold names above made both lists.

Regardless of the current list I think George W. Bush was a good president. I certainly don't think he was one of the 10 or even 20 worst. Time will adjust his position, like it has for Ronald Reagan who has just now cracked the "Top 10 Best Presidents" of these same liberal historians. It takes time for them to figure out what exactly a good president is. 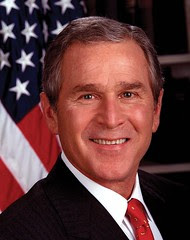 Shared with Flock - The Social Web Browser
Posted by Dane Bramage at 11:07 AM 12 comments:

Quote about the Stimulus Package

Posted by Dane Bramage at 10:41 AM No comments: