Well it seems that tree huggers in California were dealt a defeat by the Supreme Court. The whiny environmentalists made some rather bold unsubstanciated claims that Naval sonar hurt marine mammals. They had lowers courts actually limit the Navy's use of sonar during exercises off the California Coast. 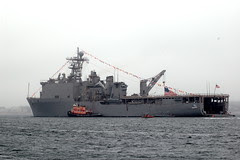 The court, in its first decision of the term, voted 5-4 that the Navy needs to conduct realistic training exercises to respond to potential threats by enemy submarines.

Court rules for Navy in dispute over sonar, whales - Road Runner
Blogged with the Flock Browser
Posted by Dane Bramage at 11:29 AM