I had often joked about how moonbats had elevated Barack Obama to the status of god. Well the Dutch have really gone the extra mile. A Dutch newspaper actually depicts Obama as God. 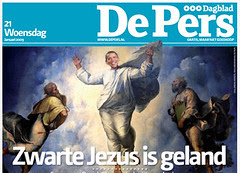 But the picture in free newspaper De Pers probably best sums up the mammoth expectations of the world on President Obama's shoulders. It prints a rendition of Raphael's The Transfiguration with the first black US president depicted as Jesus, flanked by two prophets, the clouds looming behind him lit up. The headline reads "Black Jesus has come".

True feelings or paper selling hype? I thought the latter until I read a little farther.

The Dutch Crown Prince Willem-Alexander told a press conference in Dubai that the inauguration of Barack Obama was "probably more important than the release of Nelson Mandela".

The election of the United States' first black President was monumental but I seriously doubt President Obama faced the persecution Nelson Mandela did. I get the feeling that there are a great many people whose grasp of reality is tenuous at best.

In closing I would like to treat everyone to this video;Hope and Change Fulfilled from the good folks at The Nose On Your Face

this blog is kawaii XD
チラシ 印刷
I am sorry for doing this lol
I like to drinkコーヒー these days.
you know肴?
its food for sake.