Obama Does It Again

He opened his big mouth while overseas and spouted a major lie...

If you actually took the number of Muslims Americans, we'd be one of the largest Muslim countries in the world.

World News Examiner: Obama: US 'one of the largest Muslim countries in the world'

The article immediately pointed out that even if we had six million Muslims we don't come close to being "one of the worlds largest Muslim Nations".

I will be interested to know how the Obama machine plans to spin Barack Obama's gaff. I think it is more bowing-ring kissing-sucking up by the President as he prepares to be awe struck in the Middle East by Islamic leaders again. 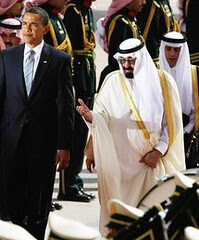 (H/T to Shamara at Booker Rising)
Posted by Dane Bramage at 2:22 PM