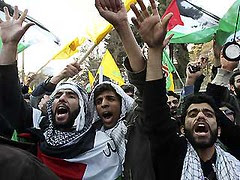 Yesterday was the historic inauguration of Barack Hussein Obama as the 44th President of the United States of America. Liberals celebrated the Great Obama Love Fest worldwide.

"Obama fever is all over the whole world," said Peters, 62, who grew up in North Carolina and New York. "I was congratulated by I don't know how many Swedes after the election. I think what he stands for needs to be celebrated."

"No one is doing their favorite songs or greatest hits," Peters added. "We're doing songs about hope."

In London, Americans could get free admission to Madame Tussaud's waxworks to see the new figure of Obama, and Queen Elizabeth II sent the new president a personal message of support. Parties were scheduled in dozens of venues, from ritzy hotels to local sports bars.

Not everyone ushered in the new era with celebration and well wishing.

"Where are the freedom seekers?" one poster read that had the word "Gaza" on it and a picture of a weeping Palestinian, Reuters reported. Demonstrators waved Palestinian flags and chanted "Death to Obama," outside the Swiss embassy, and Reuters said it obtained pictures of Obama's image laid on the road for cars to drive over

So much for Mr. President's universal appeal. In some ways this is a very important development and one I am sure the MSM, Democrats and liberals will fail to see. Haters don't care if your black, white or brown. The Iranian protesters showed just as much hate for President Obama, as they did for former President Bush. What people should take away from this is that the "New Era" replete with warm fuzzies of "hope and Change" is over already. The image that the media had built up of President Obama as some universally likable bringer together of different interests was mocked, stoned, run over by cars and burned. The man in the Oval Office today is hated by the middle east Muslims like his predecessors were.  Let there be no delusions about that.

And please somebody, anybody tell me what this "New Era" is? How is it different from the old era?  When Bush took over from Clinton was that a "New Era" too? Or are only Democrats allowed to have "New Eras"?
Posted by Dane Bramage at 6:09 PM

Oh Dane, You would have to search far and wide to find people already angry and traumatized by war to point and say "see they hate Obama too". They aren't making a statement against his actions as president of the US. He hadn't made any executive orders yet. Can't you just be glad that so many Americans, and other foreigners came together in peace, with renewed spirits of hope and determination. His 1st official day in office he did make some radical executive orders; salary freeze on sr. gov't officials, written ethics contracts binding all gov.t senators and reps. to sign and abide by. Kicked out lobbyists and banned any gifts to gov't. officials. Banning secrets of gov't to the public unless it's warranted and supported by the constitution, and enlisting the help and ideas from average Americans in all walks of life to help solve problems facing the country. He said "as of today the job of being a public servant will be to serve the people of America, not themselves, special interests, or corporations". He also ordered the closing of Gitmo Bay w/i 1 yr. and a review of all the trials and cases there. He also banned torture.That's pretty darned good for a first day. And you're mistaken and outdated, this isn't about partisanism, it's about justice, dignity, and humanism.
.P.S. Happy New Era(Year)
Anonymous

A well written comment if I must say so but I think you read too much into my post. I am merely saying that everyone who thought Obama had universal appeal need to wake up. Regardless of how long he has been in office or what liberals perceive as an end too all the woes, he is the POTUS and foreigners have already demonstrated against him on the basis of his office, not the content of his character (or lack there of). You like many of your leftist friends have heralded the "Day One" actions of the President as sweeping successes and affirmation of his greatness. Justice, dignity and humanism? Give me a break. Gitmo was a political selling point, a rallying cry for liberals. It served it's purpose. Now the question is can President Obama keep us safe through his term in office. If there are no more attacks on American soil for the next 4 - 8 years, then you might be able to say closing Gitmo was a good thing. Day two is far too soon to be calling that order a success. You are obviously still caught up in the Obama Love Fest. Were you booing Bush too? Those liberals at the send off were so dignified doing that. Makes you wonder if they know what dignity is.