Okay according to sitemeter, Some time yesterday I had my 50,000th visitor. Yeah me! I find that amazing but also humbling given that last year I only posted 21 items. Now I am sure that my return visitors are probably next to non-existent. And for some reason DOZENS of people show up to see my friend Scott's zipper! 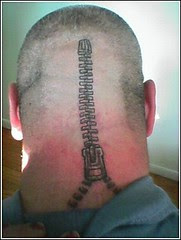 But the numbers are not why I decided to blog in the first place. I think I have something to say and by golly you had better listen!(or don't! It is a free country after all)

I think that with 2010 and the start of a new decade I will renew my pledge to no one in particular, to point out liberal lunacy, hypocrisy and general moonbattery. At the same time exalting Christ and Christian moral values. I have already made some template changes and promise to devote more time and energy to this and and my other blog.

And I hope that the number of returning readers increase. Not that there is anything wrong with people coming to see Scott's stupid zipper tat tastefully thought out and beautifully drawn tattoo. And thank you Scott for being a faithful returning reader.
Posted by Dane Bramage at 4:45 PM

50,000 visitors? You need to clean the carpets or a least buy a new Welcome mat.