I read this over at Perspectives in Motion. It was quite eye opening AIDS "education" a murderous farce D L Foster points out some amazing facts and disturbing contridictions:

According to Abortionfacts.com "All condoms have flaws or holes. These aren't poked into them intentionally by someone. They occur naturally in all latex condoms. The average hole size is 5 microns. A sperm is only 2.5 microns. An HIV virus that causes AIDS is only .1 micron. In one test, 33% (1/3) of the latex condoms leaked HIV sized particles! The diagram at the left top shows these sizes to scale. [snip] 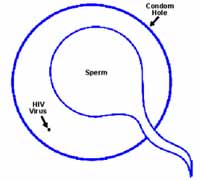 Us Helping Us, a black AIDS "education and awareness" group in DC are complaining about the an ad (left) aired by the National Institutes on Drug Abuse. Ron Simmons, UHU president, told the Southern Voice, "It implies that drug use and HIV came together." "It sounds as though if you get high you get HIV. If you protect yourself, you can avoid HIV." The CDC (a government agency) funds Simmons' group. Simmons must not have taken the time to check the statistics published by the group who gives him money to spout the type of drivel he does.

Check out the entire post. Be informed.
Posted by Dane Bramage at 8:58 AM