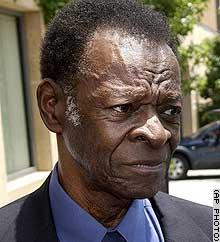 I was really saddened to hear that Veteran actor Brock Peters died Tuesday from pancreactic cancer. He was 78. No one will forget his powerful role as Tom Robinson in "To kill a Mockingbird". The The Telegraph says

In one courtroom scene, in which Robinson is asked by his lawyer whether he has committed the rape, the accused man answers firmly, but with tears in his eyes: "I did not, sir." According to Peters, "There wasn't a dry eye on set filming that scene… [the director] Robert Mulligan sat me down and asked me to prepare for the point where I burst into tears by only going to places in my mind where I remembered and experienced pain, and let me tell you the tears did come."

The Telegraph article does a very good job of listing Peter's significant big screen roles throughout his lifetime. T.V. soap fans will remember him as Frank Lewis in "The Young and the Restless (1982-1989). Trekkers will undoubtedly remember Peters as Admiral Cartwright in Star Trek IV: The Voyage Home (1986) and in Star Trek VI: The Undiscovered Country (1991) and as Josesph Sisko, Captain Benjamin Sisko's(Avery Brooks) father. Peters also lent his distinctive bass voice to many animated shows.

He is survived by his daughter so please keep her in your prayers.
Posted by Dane Bramage at 5:48 PM