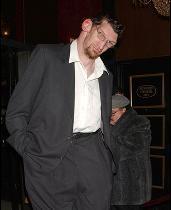 I found this at ginasrantings. Matthew McGrory has Died At first it took a moment to sink in who he was.

LOS ANGELES - Matthew McGrory, the deep-voiced 7-foot-plus actor who moved from appearances on Howard Stern's radio show to a high-profile role as a gentle giant in the movie "Big Fish," has died. He was 32.
McGrory died Tuesday at his home in Los Angeles, said director Drew Sky, who was working with him on his current movie, a biopic of wrestler-turned-actor Andre the Giant. Paramedics determined he died of apparent natural causes, police said.
McGrory, who had size 29 1/2 shoes, appeared on Stern's show in the 1990s and received other attention from the national media even before he became an actor. He attended law school and showed up in music videos before starting his career in Hollywood B-movies.
He played a human Sasquatch in 2001's "Bubble Boy," an alien in "Men In Black II" (2002) and Tiny in the Rob Zombie horror movies "House of 1000 Corpses" (2003) and its sequel released this year, "The Devil's Rejects."

If I am not mistaken, McGrory was in the Guiness Book for having the largest feet in the world. It looked like things were working out well for him. My Prayers go out to his family and friends.
Hat Tip: ginasrantings
Posted by Dane Bramage at 7:54 AM