New Leadership Blog: Do You Laugh Or Cry? 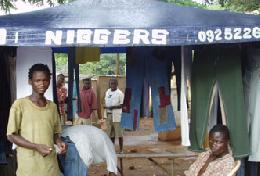 New Leadership Blog has an article Do You Laugh Or Cry? about this article P.Diddy Rules, Nigga! Freda T Robinson says

An African American tourist was on a 7,000 mile charitable bike trip through Africa when he came across this store in Malawi called "Niggers". According to the writer, the store name was apparently inspired by rapper Sean "P Diddy" Combs. It is ironic that we progress from being called nigger to "nigra". Then we go from colored to black, and now finally we're called African Americans. Now, our people from the motherland embrace a vulgar name we were called when we first arrived here in America!